Ok, j'ai comprisOk
2015(1)(2) Full Year results results:
Achievement of the2011-2015 targets(6) 2015, of which:
Forecasts for 2016:
Augustin de Romanet, Chairman and CEO of Aéroports de Paris, said: "The results for 2015 are in line with our forecasts. 2015 was marked by the achievement of our 2011-2015 targets and by the presentation of our 2016-2020 strategy, Connect 2020.
Since 2011, we have put the satisfaction of our customers – passengers and airlines – at the heart of our concerns and have outperformed our targets in terms of quality of service. Moreover, in line with our ambition, we have become the European reference in terms of Corporate Social Responsibility in our sector. Traffic at our Paris airports, our main development driver, was dynamic with average annual growth of 2.7% between 2011 and 2015. Our strategy for retail activities was crowned with success, with a sales/PAX at €19.7, above our 2015 target of €19. Our financial discipline and our operational robustness led to a 34% increase in EBITDA since 2009 and growth in the net result attributable to the Group of 6.9% in 2015 compared to 2014.
2016 marks the start of a new cycle, with our strategic plan Connect 2020, in keeping with our focus on optimisation, attractiveness and growth. Based on a traffic growth assumption of 2.3%, we expect in 2016, compared to 2015, a slight increase in EBITDA, in compliance with our 2016–2020 trajectory of EBITDA growth and an increase in net result attributable to the Group above or equal to 10%, including in particular the capital gain of the current headquarters disposal."

(1) See the paragraph "Forecasts" in this release
(2) Audit procedures have been carried out but the audit report relating to the certification of Aéroports de Paris consolidated financial statements at 31 December 2015 are currently in the process of being issued. Following financial statements are projects of financial statements
(3) Unless otherwise stated, percentages compared 2015 data to 2014 data. The 2014 restated financial statements are disclosed in appendices
(4) Sales from airside shops per departing passenger
(5) Subject to the approval of the Annual Shareholders General Meeting of 3 May 2016. As a reminder, an interim dividend for 2015 financial year of €0.7/share was paid in December 2015. Should the approval occur, the 2015 dividend should amount to €1.91/share and be paid in June 2016
(6) Targets disclosed in the press releases dated 20 December 2012 entitled “2012 and 2015 targets” and the press release of 29 July 2015, on the www.aeroportsdeparis.fr website
(7) Targets disclosed in the press released of 12 October 2015, available on the www.aeroportsdeparis.fr website
Download the release for more content 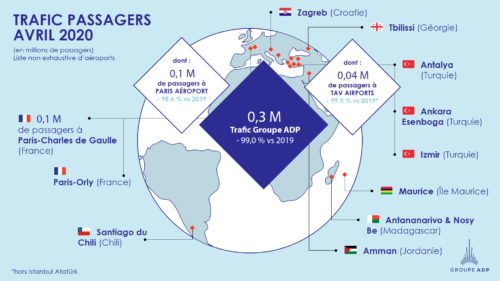 @GroupeADP Welcoming our passengers in optimal sanitary conditions is our top priority! We an...