Ok, j'ai comprisOk
Consolidated revenue up by 17.8%2 3, at €3,526 million
1. These figures take into account the full consolidation of Société de Distribution Aéroportuaire and of Relay@ADP results since April 2019, and of AIG results since April 2018.
2.The Group 9M 2018 revenue as published on 29 October 2018 was restated following the Istanbul Ataturk airport end of operation on 6 April 2019 (IFRS 5 standard). The Group consolidated revenue doesn't take into account TAV Istanbul revenue for 2018 and 2019. As a reminder, the revenue for TAV Istanbul as of 9M 2018 was €361M ;

Reminder of 2019 assumptions and forecasts, unchanged since the publication of the 2019 half-year results, on July 25th 2019
Augustin de Romanet, Chairman and CEO of Aéroports de Paris SA – Groupe ADP, stated:
"The 17.8% increase in revenue over the first 9 months of 2019 is based on good performance in all activities of the Group. Groupe ADP's traffic, excluding Istanbul Atatürk's traffic in 2018 and 2019, grew by 2.8% over the first 9 months of 2019, with an increase of 3.4% in Paris. In Paris, retail activities are still under sustained growth with the sales per passenger for airside shops up by 6.6%, at €19.0. Regarding international activities, the Group shows strong results thanks to the growth of international traffic in the Turkish airports of TAV Airports and the good performance of TAV Airports' services companies, which are growth drivers for the Group after the closure of Istanbul Atatürk airport."

[1] This document is voluntarily made by Aéroports de Paris in compliance with the AMF recommendation. See AMF recommandation - Guide de l'information permanente et de la gestion de l'information privilégiée– DOC-2016-08.
[2] Unless otherwise stated, percentages are comparing the first 9 month of 2019 data to 2018 comparable data.
[3] The Group 9M 2018 revenue as published on 29 October 2019 was restated following the Istanbul Ataturk airport end of operation on 6 April 2019 (IFRS 5 standard). The Group consolidated revenue doesn't take into account TAV Istanbul revenue for 2018 and 2019. As a reminder, the revenue for TAV Istanbul as of 9M 2018 was €361M.
[4] TAV Airports traffic is taken into account at 100% according to their financial communication, including Istanbul Atatürk traffic until 6 April 2019. Following the acquisition of a 49%-stake in Antalya airport, traffic of this airport is 100%-included since January 2018 for the need of the analysis, while TAV Airports only has included Antalya traffic since May 2018.
[5] In April 2019, Groupe ADP reviewed its links with Société de Distribution Aéroportuaire, Relay@ADP and MZLZ-TRGOVINA D.o.o (Société de Distribution Aéroportuaire Croatia) and considers controlling these entities since then. Booked until this date with the equity method, these companies are since April 2019 fully consolidated.
[6] Sales in airside shops divided by the number of departing passengers (Sales/Pax).
[7] As a reminder, Istanbul Atatürk airport welcomed 16mpax between 01/01/2019 and 06/04/2019 which were not taken into account in TAV Airports' traffic growth assumption concerning 2019
[8] TAV Airports' EBITDA guidance, underlying Group's EBITDA guidance, is built on the assumption the following exchange rate assumptions: EUR/TRY = 6.5, EUR/USD = 1.13
[9] Following the Istanbul Ataturk airport end of operation on 6 April 2019 (see 8 April 2019 press release), the IFRS 5 standard "Non-current assets held for sale and discontinued operations" is applying to TAV Airports since this date. Revenue and operating expenses of TAV Istanbul for 2018 and 2019 are presented on a separate line on the income statement as "net income from discontinued activities", in accordance with the IFRS 5 standard. Therefore, consolidated revenue, EBITDA and operating income of the Group don't take into account the activity of Istanbul Atatürk airport anymore.
[10] Takes into account the introduction by the law No. 2018-1317 of 28 December 2018 of finance of the mechanism charging Aéroports de Paris 6% of the costs hitherto fully covered by the airport tax product.
Download the release for more content
home, quarter, revenue,
Download the document Download the document 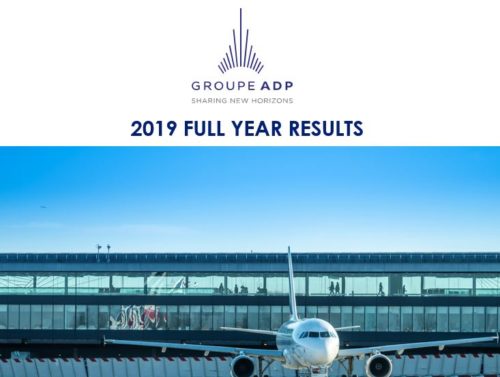 Good performance of all the activities, stability of...