Ok, j'ai comprisOk
The new Beijing’s Daxing International Airport (BDIA) will be commissioned this autumn. As a reminder, on 12 September 2014, ADP Ingénierie, company member of Groupe ADP, was notified as sole winner of the international competition organized by Beijing New Airport Construction Headquarters (BNAH) for the Architectural Schematic design of Terminal 1 at Beijing’s new Greenfield Airport.

Located at Daxing, 60 km south of Beijing’s Tiananmen Square, the new Beijing Daxing International Airport will eventually have seven runways and over 100 million passengers passing through it every year, making it one of the world largest. With its 700,000 sq. surface area and its five km-long façade, the BDIA Terminal 1 will have an annual capacity of 45 million passengers at opening, which will later be expanded to 72 million passengers.

After having been declared winner of the competition, ADP Ingénierie has finalised the design with the support of Zaha Hadid Architects, in a team managed by BNAH. ADP Ingénierie has also cooperated with the Beijing Institute for Architectural Design (BIAD) for providing support all the way during the design development phase
Thanks to its internal resources in terms of  planning, architecture and engineering, ADP Ingénierie has proposed a sophisticated concept, building on its longstanding experience of airport conception and its experience from the iconic project to develop Paris-Charles de Gaulle Airport one of the world's largest airport projects .
ADP Ingénierie's concept consists of an audacious choice:  the decision to stack the international and domestic levels vertically instead of spreading them out horizontally. This innovation led to designing a compact terminal with a single center for boarding piers control, which are positioned as stars.

The centralized single-terminal concept provides numerous benefits: efficient and economical to operate, enhanced passenger experience from the many services provided including shopping areas and inter-modal ground transport.
Given the terminal’s compact design, the distance between the terminal center and the farthest boarding gate is 600 meters maximum, which is way less than Asian and European terminals with similar capacity. Passengers can easily find their way within the open interior layout of the terminal, gravitating naturally to the grand skylight central area where shops and services are located, and then walking straight ahead to their gate.
The human approach is at the heart of our airport design, placing the passenger at the center of our attention to propose a good and enjoyable experience through is journey within the terminal. Once inside, travelers can easily intuitively find their way in the terminal. The openness of the central space allows the passenger to grasp all the terminal parts and functions, reducing the stress factor linked to the unknown and uncertainty. The feeling of well-being is reinforced by the architecture, which enhances the sense of movement within the terminal.
Both modern and respectful to the cultural environment, the terminal is inspired by Chinese traditions and symbols, while giving them a contemporary touch. The new airport is a unique chance to integrate sustainable development to the heart of design.
The goal is clear: to build an iconic airport with a new philosophy regarding environment management, climate protection and sustainable exploitation, in line with its low carbon airport positioning, the new Beijing airport will aspire to become Asia’s leading green hub.

According to Gratien Maire, CEO of ADP Ingénierie, "ADP Ingénierie has been working for more than 25 years in China and the Daxing airport's terminal 1 is one of our major achievements, in terms of architectural design. Thanks to the strength of the infrastructures design in the largest cities of the country, we contribute to the development of the airport industry in China.
For the future, ADP Ingénierie and Groupe ADP plan to strengthen their footprint in China along the value chain, by looking at opportunities on massive building projects in order to meet the future traffic growth."
ADP Ingénierie currently works on more than 140 airport projects worldwide and is part of the global international offer that Groupe ADP now offers.
With more than 700 airport references in more than 100 countries, ADP Ingénierie, active in all stages of the airport value chain, provides architectural design services, airport engineering studies, consulting missions and assistance to project management. Its teams of experts can support a project from initial design to operational phases and combine multiple skills, from engineering to architecture, studies and supervision of work through training, in a 360° approach of the airport life cycle.

In China, ADP Ingénierie has won a large number of planning and architectural competitions over the last 25 years, and therefore has subsequently implemented or supported the design of major references such as Shanghai Pudong Terminal 1, Nanjing Terminal 2, Chongqing Terminal 3A or the new of Chengdu Tianfu airport.
In addition ADP Ingénierie has been carrying out a large number of consulting assignments, such as master planning services or optimization of airside infrastructures.
Download all images 5 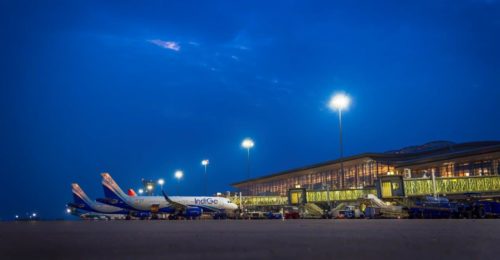