Ok, j'ai comprisOk
In October 2020, Groupe ADP total traffic [1] is down by 56.8% compared to October 2019 with 9.1 million passengers welcomed for the entire network of operated airports.

At Paris Aéroport alone, the traffic decreased by 75.6% compared to October 2019 with 2.3 million passengers welcomed. At Paris-Charles de Gaulle, only terminals 2E, 2F and 2AC are currently opened in order to handle the entirety of commercial passenger flights. At Paris-Orly, the open terminals are Orly 3 and 4. Orly 1 is closed since November 11th at night.

Regarding Groupe ADP's international platforms, and regarding scheduled commercial traffic, all airports are open to all types of commercial flights, although some local restrictions may apply. Delhi and Hyderabad airports are open for domestic flights and international flights only with the countries India has signed bilateral agreements with.
As a reminder, Groupe ADP has signed on November 5th a partnership with Cerballiance, to ease the carrying out of the screening tests due to travels for departing passengers [2]. Thanks to this partnership, departing passengers can make an appointment in a laboratory of the Cerballiance network or directly at the airports screening centers, implemented at Paris-Orly since November 6th, and since November 12th at Paris - Charles de Gaulle. Passengers will be able to obtain a result within 48 hours for a RT-PCR test and within 1 to 2 hours for an antigenic test. To date, these antigenic and RT-PCR tests are supported by the French Health Insurance for all passengers.

Passenger traffic at Santiago de Chile Airport, 45%-owned by Groupe ADP, decreased by 81.3% in October 2020 and has decreased by 64.9% since the beginning of the year.

Passenger traffic at Amman Airport, 51%-owned by Groupe ADP, decreased by 85.8% in October 2020 and has decreased by 76.3% since the beginning of the year.

Given the uncertainties linked to the health crisis, Groupe ADP is working on a traffic hypothesis for 2021 which would be, to be more relevant, compared to the 2019 traffic data. This 2021 hypothesis could thus be established in a range between 45% and 55% of the 2019 traffic. It would be based in particular on a slow and gradual recovery of traffic from April 2021 and the absence of new travel restrictions as of summer 2021.
[1] Group traffic @100%. Group traffic @100% does not take into account the traffic of Istanbul Atatürk Airport in 2019. Group traffic @100% in 2020 includes the traffic of Delhi International Airport Limited (DIAL), Hyderabad International Airport Limited (GHIAL) and Mactan-Cebu International Airport as of 1 March 2020. For information, taking into account the traffic of Istanbul Atatürk Airport in 2019, the group's traffic @100% is down by 64.1% since the beginning of the year. Excluding the integration of GMR Airports as of 1 March 2020, the decrease in group traffic would be 68.6% since the beginning of the year.
[2] See press release of 5 November 2020.
[3] Following the implementation of TAV Airports' share buyback program, Groupe ADP holds, as of 30 September 2020, 46.38% of TAV Airports (compared to 46.12% previously)
[4] See press release of 8 April 2019. Istanbul Atatürk’s traffic is taken into account until 6 April 2019, date on which Istanbul Atatürk commercial flights were transferred to the new Istanbul airport.
[5] See press releases of 20 and 26 February, and 7 July 2020 on shareholdings in GMR Airports. 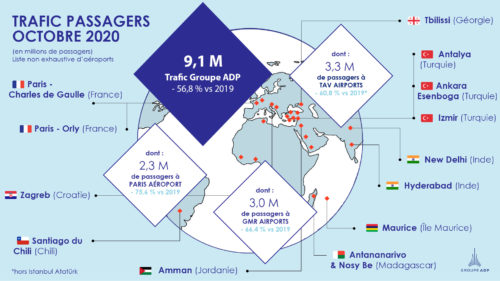 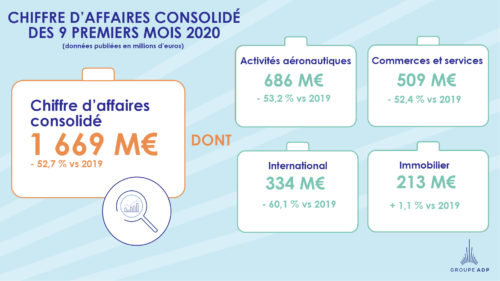 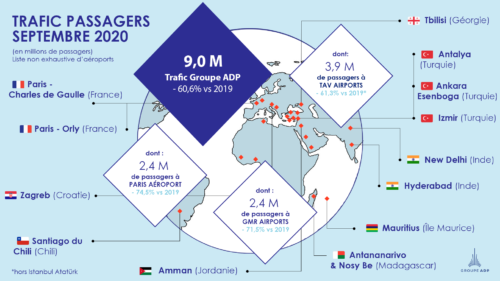 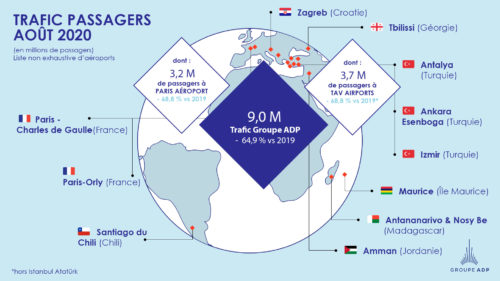