Designed by Ateliers 115 Architectes, the Belaïa office building will have a total area of 23,500 sq.m (21,200 sq.m of office space, 1,300 sq.m of inter-company restaurants and 1,000 sq.m of shops on the ground floor). Opening onto a vast interior courtyard, the building enjoys a meticulous urban integration: it is located at the foot of tram line T7 and the moving walkway, which connects Cœur d'Orly with airport terminals in under six minutes. The construction of this office building began at the end of 2017 and is expected to be completed for the second half of 2020. 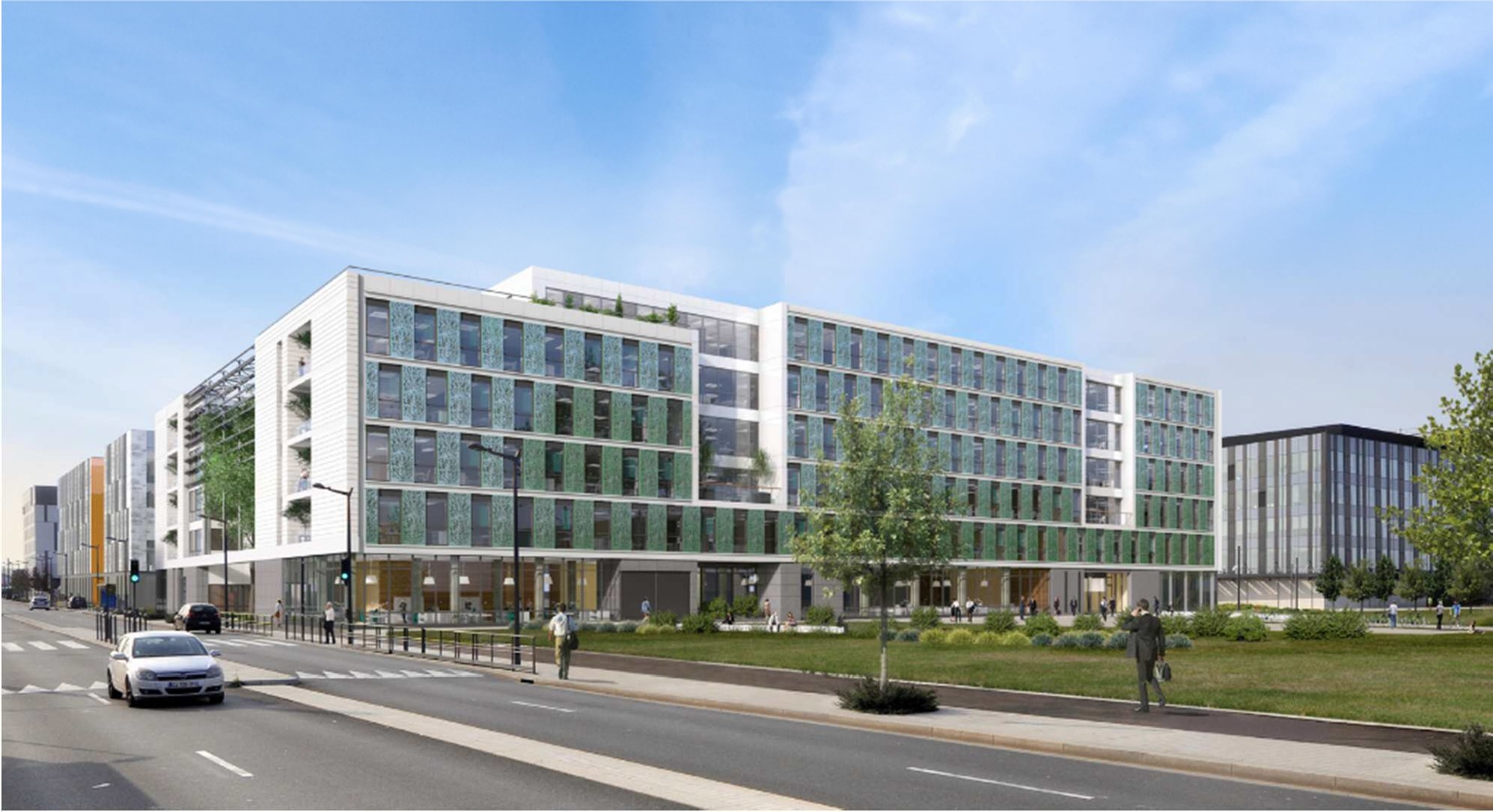 After the 2015 delivery of Askia, the first office building in Cœur d'Orly (leased in majority and used to Etablissement Public Territorial Grand-Orly Seine Bièvre) and the setting up of the Accorhotels hotel complex (three hotels offering a total of 710 rooms) between 2016 to 2017, the construction of the Belaïa office building cements the development of the Cœur d'Orly district.
An exemplary project from an environmental perspective, Belaïa is aiming for the BREEAM® "Very good" label and the “Excellent” certification from NF Bâtiments Tertiaires-HQE®. Comfort and well- being are at the heart of this five-storey building designed to meet the highest international standards: restaurant, services, an interior courtyard, flexible open-plan office areas, modular areas, a ceiling height of 2.70 metres throughout the building, a 1.35-metre module grid and more.

Serge Grzybowski, Real Estate Director at Groupe ADP, states: “This building is emblematic of our 2020 Connect strategic plan, which aims to reinforce our role as investors by developing the airport city. Through its proximity to the airport, Belaïa, the second office building in Cœur d'Orly, will meet the demand of businesses who are looking to take advantage of this connectivity and the numerous services provided. The appeal and connectivity of Cœur d'Orly will be considerably reinforced by the extension of the Grand Paris Metro Line 14 by 2024, as well as the development of the new Line 18 and the opening of a TGV railway station.”

And Christophe Kullman, Covivio CEO to add: "Cœur d’Orly illustrates two major pillars if the Covivio's approach: long-term commitment and partnership culture. With Askia, a fully rented building and now with Belaïa, Cœur d'Orly is shaping the real estate of tomorrow. Responsible real estate, innovatively planned to provide intelligent combinations of work and living areas. Those vision and requirement of quality supports all the projects that Covivio is promoting throughout Europe, whether it is spaces for work, travel or living.” 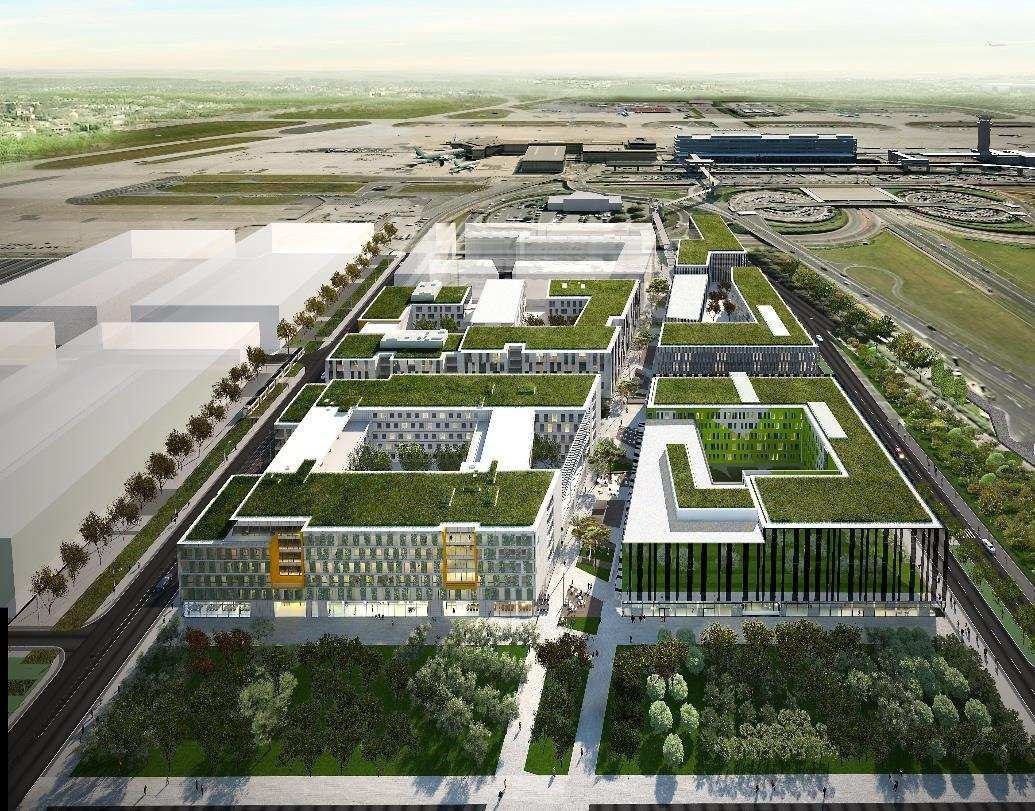 Located 10 minutes from Paris, the Cœur d'Orly business district is easily accessible by car (A106/A86/A6/A10) and public transport (Orlyval-RER B, RER C, tramway T7, bus, etc.), which will further be reinforced by the Metro du Grand Paris.
Furthermore, Paris-Orly Airport has, over the years, become a major business hub in the heart of Grand Orly, the first economic centre in the south of Île-de-France region. Large-scale modernisation works are in progress at the airport, which will change its appearance and make it more welcoming. This is thanks, in particular, to the construction of an 80,000-square-metre connecting building, which will create a link between the South and West Terminals by 2019. 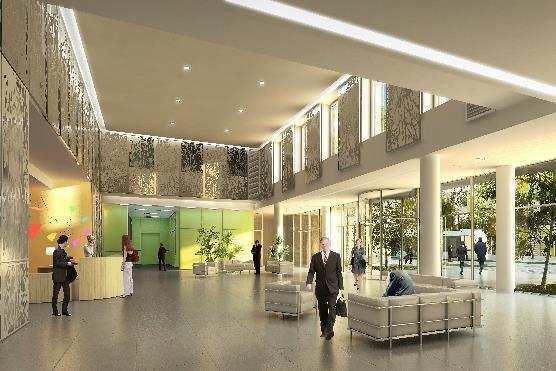 View of lobby of the Belaïa offices lobby © ArteFactorylab

Groupe ADP develops and manages airports, including Paris-Charles de Gaulle, Paris-Orly and Paris-Le Bourget. In 2017, the Group handled through its brand Paris Aéroport more than 101 million passengers and 2.3 million metric tonnes of freight and mail at Paris-Charles de Gaulle and Paris-Orly, and more than 127 million passengers in airports abroad through its subsidiary ADP International. Boasting an exceptional geographic location and a major catchment area, the Group is pursuing its strategy of adapting and modernizing its terminal facilities and upgrading quality of services; the Group also intends to develop its retail and real estate businesses. In 2017, Group revenue stood at €3,617 million and net income at €571 million. Registered office: 1, rue de France, 93 290 Tremblay-en-France. Aéroports de Paris is a public limited company (Société Anonyme) with share capital of €296,881,806. Registered in the Bobigny Trade and Company Register under no. 552 016 628.  www.groupeadp

Thanks to its partnering history, its real estate expertise and its European culture, Foncière des Régions is redefining its raison d'être in line with the revolution in usage, inventing today's user experience, designing tomorrow's city and becoming Covivio. A preferred real estate player at the European level, Covivio is close to its end users, capturing their aspirations, combining work, travel, living, and co-inventing vibrant spaces. A benchmark in the European real estate market with 21 Bn€ in assets, Covivio offers support to companies, hotel brands and territories in their pursuit for attractiveness, transformation and responsible performance. Its living, dynamic approach opens up exciting project and career prospects for its teams. Covivio’s shares are listed in the Euronext Paris A compartment (FR0000064578 - COV), are admitted to trading on the SRD, and are included in the composition of the MSCI, SBF 120, Euronext IEIF “SIIC France” and CAC Mid100 indices, in the “EPRA” and “GPR 250” benchmark European real estate indices, and in the ESG FTSE4 Good, DJSI World & Europe, Euronext Vigeo (World 120, Eurozone 120, Europe 120 and France 20), Oekom, Ethibel and Gaïa ethical indices. Covivio is rated BBB/Positive outlook by Standard and Poor’s.  www.covivio.eu